To improve patient access in Europe, EFPIA is calling on HTA bodies to join up when assessing the therapeutic benefit of innovative medicines

Healthcare decision-makers throughout Europe – including national health services, social security institutions, reimbursement agencies, etc. – base their decisions on information and evidence. Health Technology Assessment (HTA) is the tool that decision-makers use to gather and analyse this evidence.

So What is HTA in a Nutshell?

HTA is a multidisciplinary process that summarises information about the medical, social, economic and ethical issues related to the use of a health technology, in a systematic, transparent, unbiased and robust manner.

Relative efficacy may be defined as the extent to which an intervention does more good than harm, compared with one or more alternative interventions under ideal circumstances.

Relative effectiveness is the same, but under the usual circumstances of health care practice.

So How Do HTA Agencies Work?

HTA agencies collect and assess information across a wide range of areas on behalf of decision-makers. While the process varies from country to country, this information focuses typically on the medical (relative efficacy and/or relative effectiveness assessment) and economic impact (for example cost-effectiveness assessment or budget impact analysis) of new pharmaceuticals on the individual patient and on the healthcare system as a whole.

Do All Assessments Achieve the Same Results?

Surprisingly, HTA agencies reach different conclusions on the medical impact (relative efficacy and/or relative effectiveness assessment) of new pharmaceuticals, even though the data studied is predominantly the same for all markets – such as safety and efficacy data from registration trials. This is because HTA agencies adopt different approaches to rating and interpreting this data. This might apply to trial design, relevant endpoints, appropriateness of defined patient subgroups and treatment comparators.

Equally interesting is the fact that the views of HTA agencies may sometimes be out of step with the outcomes of the European Medicines Agency’s (EMA’s) review of a medicine. 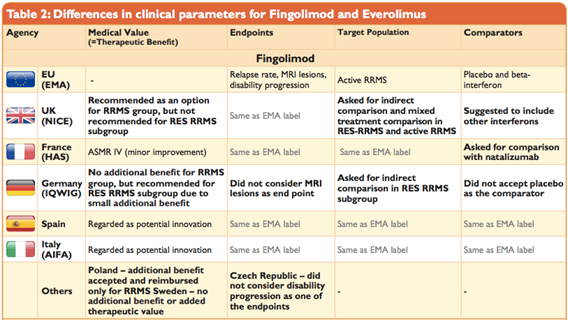 There is however an additional step which HTA agencies conduct on the basis of a relative efficacy (and in some cases relative effectiveness) assessment, which is often referred to as “appraisal”, i.e. the translation of the factual evidence assessment into an added therapeutic value rating (e.g. France, Germany). Added therapeutic value ratings are the result of a context specific interpretation of a factual assessment in light of the national burden of disease or national priority considerations and follow therefore very different patterns between countries. They are usually issued in a deliberative process including key national representatives of healthcare stakeholders. Added therapeutic value ratings cannot be easily shared across jurisdictions.

The situation is different when it comes to economics. Economic evaluations rely on locally available data, so different results will be achieved in different countries. This is mainly because European countries enjoy varying economic circumstances and costs of alternative treatments, medical services associated with a condition, including the cost of medical care by healthcare professionals, are likely to diverge.

What Mechanism Do We Have to Address these Hurdles?

The European Network for HTA (EUnetHTA) was set up in 2006, to promote more collaboration and harmonisation in the EU, by linking national HTA agencies, research institutions and health ministries. This allows for an affective exchange of information and lends support to policy decisions by European Member States.

EFPIA has been engaged with EUnetHTA since the start and supports its goal. EFPIA further supports the establishment of a permanent structure of cooperation following the conclusion of Joint Action 3 on HTA in 2020. The European Commission is currently conducting an impact assessment on options post 2020.

How is EUnetHTA Contributing in Practice?

EUnetHTA is addressing divergences by conducting European assessments of the relative efficacy of innovative medicines at the time of launch.

Already, a number of national HTA agencies are working together, together with a range of pharmaceutical manufacturers – all of whom are members of EFPIA.

Pilot projects have shown that through EUnetHTA interested stakeholders can collaborate successfully to produce European reports of relative efficacy at time of launch. However more needs to be done to make sure that national decision-makers accept and recognise these European reports and fully integrate their findings in national access pathways.​

EFPIA commissioned a study from Charles River Associates on the current country barriers to adoption of European assessments of relative efficacy at time of launch. In seven of the nine countries analysed, the differences in current methodological approaches for relative efficacy assessment could be easily resolved.

Read more about the key findings of the study

Is this Approach Really Effective?

In 2015, EFPIA commissioned an independent review of the five pilots to review the progress of Joint Action 3. Conducted by Charles River Associates, the review makes clear recommendations on how stronger collaboration in the EU on relative efficacy assessments (REAs) can be achieved during Joint Action 3. These measures will benefit HTA agencies and ultimately patients across the whole of Europe.

We believe that efficient and high quality European REAs of new pharmaceuticals at time of launch are essential. Let’s get on with it! This is the call addressed to Member States by representatives of patients, healthcare professionals, politicians, regulators, HTA agencies, and industry during the World Health Summit in 2015.

Ultimately, it will have the potential to reduce time to patient access and strengthen the equity of care throughout Europe.

CRA report: EU REA – A discussion of barriers for adoption and possible actions to overcome them

Health Benefit Assessment Of Pharmaceuticals: An International Comparison Of Decisions from Germany, England, Scotland And Australia

Heterogeneity in relative efficacy assessments (REA) across European HTA bodies: opportunity for improving efficiency and speed of access to patients?

A comparative analysis of the role and impact of Health Technology Assessment: 2013

'The value of industry involvement in HTA' (December 2011)