Officially launched on 29 April 2022, the project kicked off its operational activities with the aim to call for change in how Alzheimer’s disease care and support are organised in Europe.

Alzheimer’s disease is a neurodegenerative disease that progresses in stages, beginning with a long silent phase before symptoms occur. It is the underlying cause in 70% of people with dementia. Dementia, which is not a specific disease but an overall term that describes a group of symptoms, is characterised by a decline in memory, thinking, behaviour and the ability to perform everyday activities.

It is estimated that 9.7 million people in Europe alone already live with Alzheimer’s disease and dementia. With a rapidly ageing population, it is a growing public health concern worldwide as this number is projected to rise to a staggering 14 million by 2030.

The societal and economic cost of dementia in Europe is also very high and estimated to increase over EUR 250 billion by 2030 (with over 50% of this due to informal care costs), the equivalent of the whole GDP of Finland. AD is thus not only a debilitating and progressive disease affecting the daily lives of people, their families and carers, but also a huge burden for our economy and European nations’ healthcare and social care systems. Healthcare systems in Europe currently lack the capacity to detect, diagnose and treat AD effectively.

How will RETHINKING Alzheimer’s disease address these issues?

EBC and EFPIA will collaborate with experts from different  European countries to build an interdisciplinary consensus around practical and sustainable policy responses to Alzheimer’s disease that will aim to improve the lives of people living with it.

As different countries face specific challenges, it is important to consider the national context when advocating for policy change. For this reason, RETHINKING AD will take a closer look at the national context in 5 European countries (Czech Republic, Germany, Italy, the Netherlands, Sweden) with the aim to provide tailored solutions and policy recommendations to create a new patient pathway and care journey.

Building on the outcomes of the paper on “Alzheimer’s Disease Health System Readiness – The Time to Act is Now”, launched by EFPIA in 2020, the recommendations will focus on 2 areas in 2022: detection and diagnosis. The project will continue in 2023 with a focus on AD interventions and treatment, and monitoring. 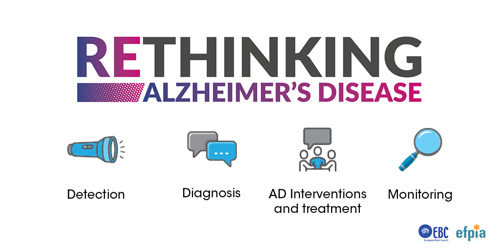 About the RETHINKING projects